We have had an impressive lightening storm several nights ago which ushered in cooler temps. The cool nights are still with us, and I don't think I have ever seen the water as flat as it is this morning. 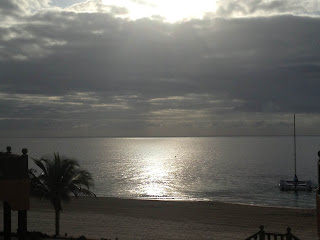 Last weekend, the El Rey Polo Club held their big, annual tournament. The weather over the weekend may 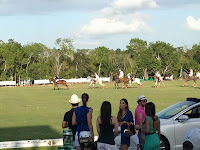 have been the best I can remember - warm, but not too hot and not humid at all. We headed out on Sunday afternoon to enjoy the final matches. Good fun! Plan to attend if you happen to be in town next year!

Also, there is a smaller tournament going on this weekend. So, you can still catch some of the action, starting at 2 pm on Saturday and Sunday. Check out their Facebook page for more details.

Cancun Tigres are back in action. Who has been to a game this season?

They are playing at home this weekend against Merida. There is a Puerto Morelos Contingent who will be cheering them on in Section 3, behind
home plate on Saturday night. You can buy tickets on SuperBoleto.com or at the Beto Avila Baseball Stadium -- around the corner from Costco/Mega.

The Dragon Mart continues to twist and turn. The construction permits were rejected by our county, Benito Juarez. In celebration, a group of Puerto Morelians marched, thanking officials for defeating the measure.

[During the march, they also collected signatures on a petition to prohibit the (ongoing) construction of another gas station on the mangrove side of the highway intersection. For a bit of perspective: The ground here is extremely porous. Surface spills filter to underground aquifers in matter of several minutes -- It is actually pretty amazing. Obviously, we can all see why a Gas Station isn't really the best idea on the edge of our ecologically-sensitive mangrove. So, even if we can't stop its construction, we can vote with our business. Can we all collectively agree to boycott the joint? Thanks!]

However, the Quintana Roo Governor who supports the project, recommends that developers take the project to court in order for them to decide the project's fate.

So, the Dragon isn't done breathing fire just yet...

There is a citizen proposal for an expansion of Animal Welfare Laws for the State of Quintana Roo. Our friends at Life´s a Beach have provided a fully translated version, as well as a link to sign a petition and show your support for the measure.

Boxing Fans: A big match is coming up between Sugar Shane Mosley and Cano, a Mexican Boxing Champion. I knabbed ringside seats for Caden & I --- which should put me in the running for Coolest Mom of the Year with that kid. Tickets can be purchased at Que Qui newspaper. They go on sale at the Oasis next week. 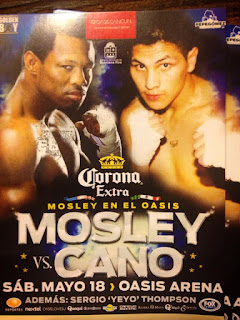 A photo that has absolutely nothing to do with PoMo but is sure to make you smile. I had a hedgehog, Poinky (short for Sir Poink-A-Lot), as a pet during college. Love these little guys.): 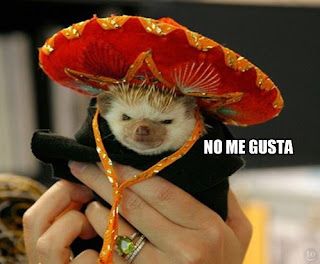